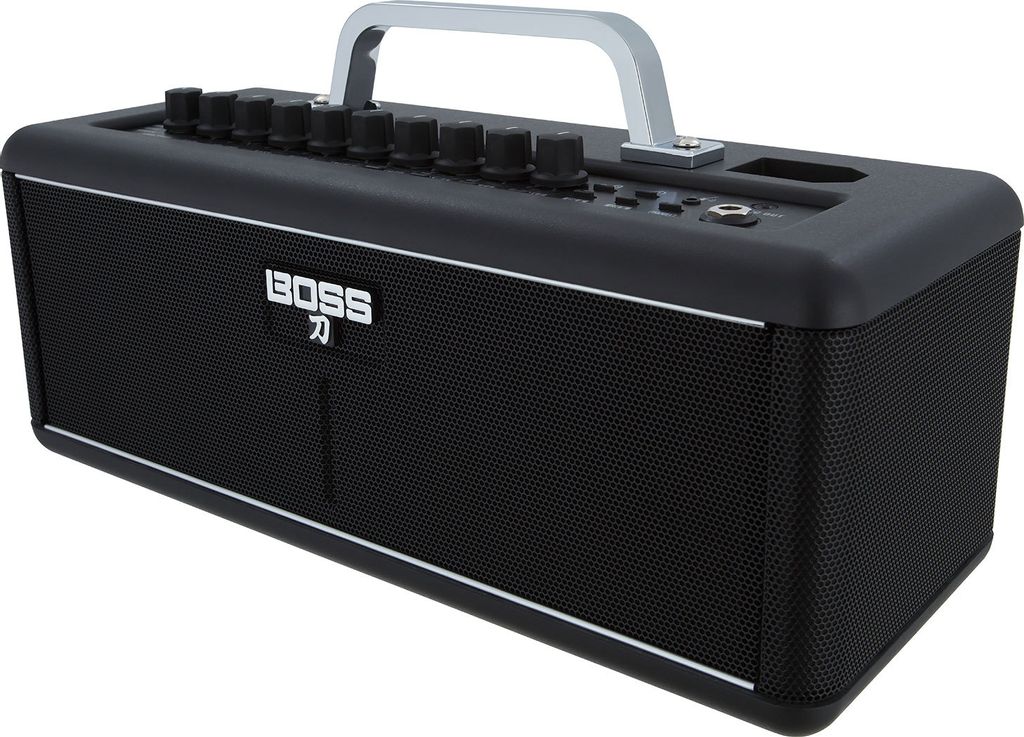 Meet the Katana-Air, the world’s first totally wireless guitar amplifier. Featuring new cutting-edge wireless guitar technology developed by BOSS, the Katana-Air gives you the freedom to jam and practice without hassling with guitar cables. And with support for battery operation, there’s no need to plug into AC either, so you can literally play anywhere!

Though compact in size, the Katana-Air is serious about sound quality. Equipped with pro amp tones and effects from the performance-class Katana amplifiers, this wireless wonder delivers premium guitar sounds for any style of music. To further extend the cable-free experience, you can wirelessly edit and organize sounds with a dedicated app and jam with songs streamed from your smartphone. With the innovative Katana-Air and your favorite axe, casual playing has never been more convenient and inspiring.

The Ultimate Convenience for Jamming and Practice

With its premium Katana sound engine and wireless operation, the Katana-Air makes it easy to enjoy rich, dynamic guitar tones—complete with advanced BOSS effects—anytime and anywhere. And that means you’ll play more often, improve your skills, and have more fun. When you want to jam at home, there’s no need to set up your big rig or rely on the dry, boxy sound of a mini practice amp. Just plug the Katana-Air’s transmitter into your guitar and riff with great sound from anywhere in the room! Thanks to its portable size and ability to run on batteries, the Katana-Air is an equally great companion for travel, parties, jam sessions with friends, and more.

The Katana-Air features new low-latency digital wireless guitar technology developed by BOSS, providing transparent sound and ultra-quick response without any lag or dropouts. The included custom wireless transmitter plugs into any electric guitar, and has indicators for power and battery status. A convenient docking port in the amp charges the battery in the transmitter, providing up to 12 hours of total playing time per charge.

Equipped with the same tones and sound-shaping controls found in the performance-class Katana amplifiers, the Katana-Air offers inspiring sounds for any style. Five unique amp characters provide a wide range of tones, from sparkling clean to BOSS’s custom high-gain Brown sound. There’s even an Acoustic character optimized for playing acoustic-electric guitar. The amp also provides integrated access to over 50 BOSS effects, including mod, delay, reverb effects optimized for the Katana-Air’s stereo speaker system. And with six onboard memories, you can store and recall your favorite amp and effects setups at any time.

The wireless Katana-Air is made even more powerful with its support for external wireless operation via Bluetooth. Available for both iOS and Android devices, the dedicated BOSS Tone Studio app gives you complete control of the Katana-Air right from your smartphone or tablet. You’re able to adjust all the amp’s panel controls, and get exclusive access to effects types and routings that are only available from the app. You can also save setups to the amp’s memories, organize sound libraries on your device, and download free patch collections directly from BOSS Tone Central.

Listen to Your Favorite Music and Play Along

The Katana-Air is a true stereo amplifier with two custom-tuned speakers and up to 30 watts of total power, delivering big, rich sound for both guitar amplification and full-range music reproduction. Over Bluetooth, you can stream music from your mobile device and play along with popular songs, backing tracks, YouTube lessons, and more. And when you just want to kick back, the Katana-Air performs double-duty as a high-quality mobile Bluetooth speaker for enjoying tunes from your music library.