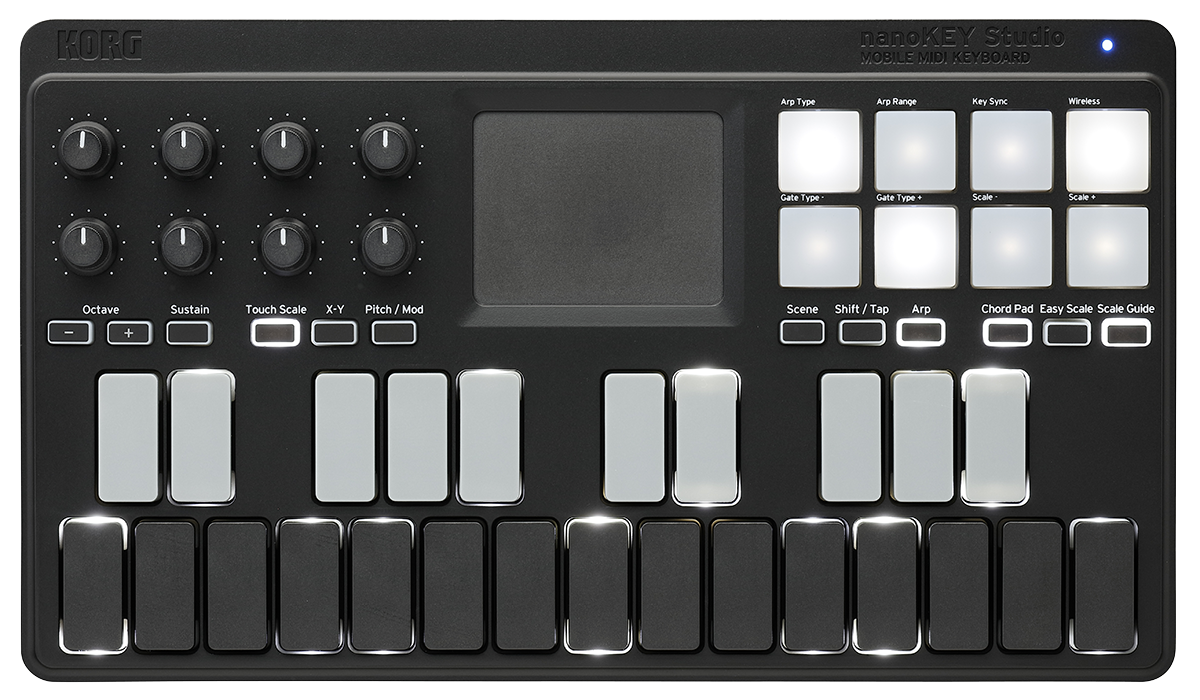 An all-in-one that delivers inspiration. A mobile MIDI keyboard that connects via USB or wirelessly.

The nanoKEY Studio provides a keyboard, knobs, trigger pads, and touch pad that lets you instantly convert your inspiration into sound. It is battery operated and can connect wirelessly to iPhone/iPad or Mac/Windows. It’s a compact, mobile MIDI keyboard that is easy to travel with, allowing ease of use anytime, anywhere.

Step-record as easily as typing. A keyboard with 25 backlit keys that illuminate.

Even if you’re not the most skilled keyboardist, the 25 velocity-sensitive keys allows you to step-record easily. The Scale Guide function illuminates the keys to show recommended notes in the scale, making it easier to play. This is a smart keyboard with a variety of performance modes, such as the Easy Scale function, that lets you produce musical phrases using any keys.

More freedom to produce music, via USB or wirelessly.

The nanoKEY Studio can connect not only via USB but also wirelessly. It’s easy to connect to an iPad/iPhone music app such as KORG Gadget or Apple GarageBand, or to your Mac/Windows music production software. Liberated from annoying cables, you’ll be free to set up your system much easier than some other products. Thanks to careful tuning, you’ll enjoy low latency and high stability.

Lightweight and compact design can be placed anywhere and easily transported.

Smaller than a sheet of letter-sized paper, you can put the nanoKEY Studio in your bag and take it anywhere. With a simple, refined, and stylish design, along with beautiful lighting with white LEDs, you won’t get tired of using it every day. With its modern design, the nanoKEY Studio is ideal for use with new devices such as your laptop, tablet, or smartphone.

Create the ultimate mobile music production system with your iPad/iPhone and the nanoKEY Studio.

The combination of the nanoKEY Studio with KORG Gadget is the ultimate combination for mobile performance. With the nanoKEY Studio that supports wireless connection via Bluetooth MIDI, your iPhone can instantly transform into a music production tool. In your room, in a coffee shop, in transit, or outdoors, you can immerse yourself in music with minimal requirements of space and time.

Eight high-sensitivity trigger pads that you can use for drum input or playing chords.

The eight velocity-sensitive trigger pads will convey every dynamic nuance of your drum performance. In chord-playing mode, the Chord Scale function automatically assigns the best chords for the key and scale you’ve selected, so your song will take shape at amazing speed. You can also assign the pads to trigger audio clips. These pads are not limited by musical genre; they deliver all-purpose music production power.

You can use a single finger to control a software synthesizer just like you can with a Kaossilator, or control a plug-in effect the same way as a KAOSS PAD. The nanoKEY Studio features an arpeggiator with rhythm patterns, letting you generate a succession of new phrases simply by touching the pad.

Eight assignable knobs for controlling your DAW and plug-ins.

A lavish and powerful bundle of music software is included free of charge.

The nano Studio series comes with an extravagant bundle of powerful mobile and desktop music software that includes iPad / iPhone apps, a special edition of KORG Gadget, and the KORG Legacy Collection M1 Le which includes plug-in versions of classic KORG instruments. If you have the nanoKEY Studio, there is no need to buy any additional software.

The sounds and functionality of “iPad / iPhone apps” can be expanded by connecting them to a nano Studio series unit.