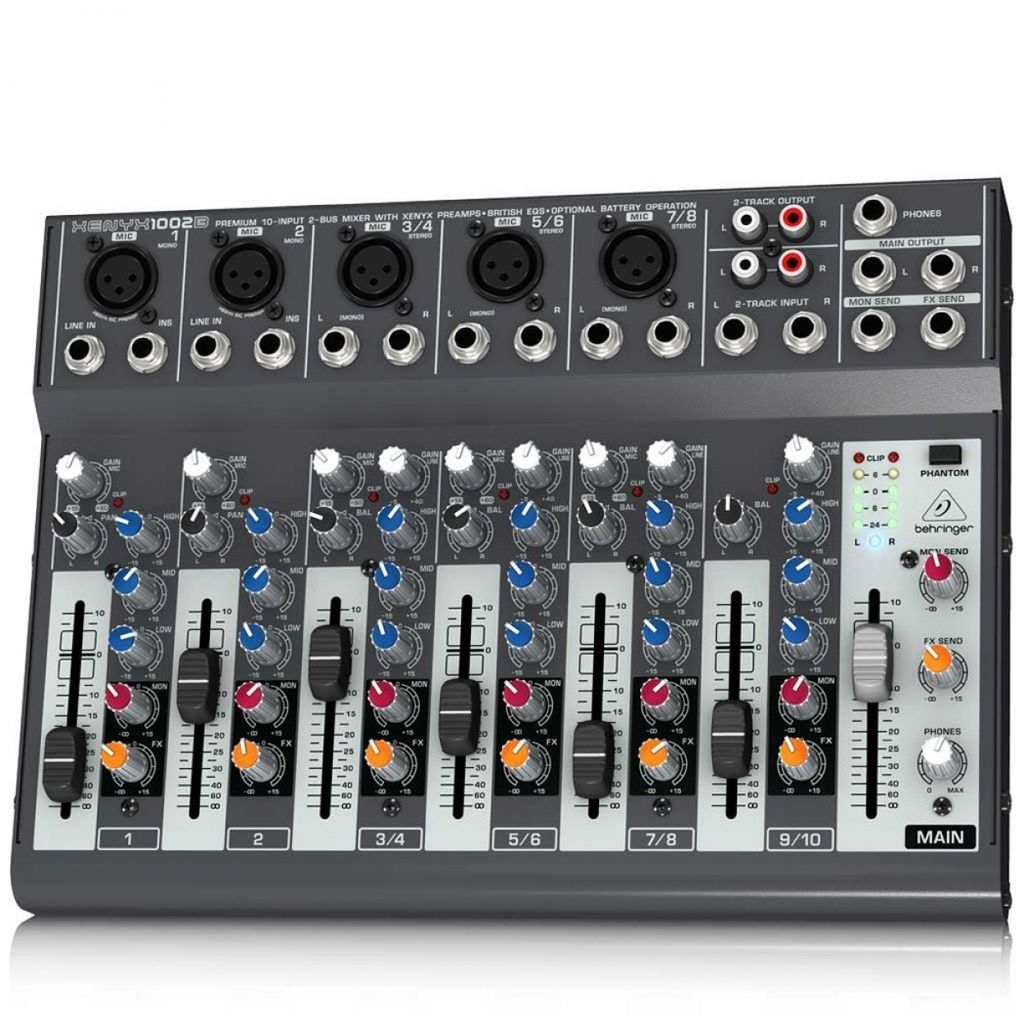 Got a solo gig at the local coffee shop? Need to make a quick public announcement? Simple sound calls for the simply superb XENYX 1002B, the BEHRINGER mixer with everything you need to give an intimate setting incredible sound. The ultra-compact XENYX 1002B mixer’s 10 Inputs (2 mic channels, 4 stereo channels with 3 extra mic inputs) allow you to effortlessly achieve premium-quality sound, thanks to the 2 studio-grade, phantom-powered XENYX Mic Preamps and ultra-musical 3-band “British” channel EQ.

The XENYX 1002B’s compact size and flexible input scheme make it the natural choice of sports announcers for calling play-by-play game action. Likewise, radio and TV reporters especially like the XENYX 1002B for its ease-of-use, remarkable fidelity and rugged reliability. And the 1002B’s convenient 9 V battery capability allows newscasters and correspondents to use the 1002B in remote locations – where the nearest power outlet may be many miles away!

The XENYX 1002B gets its name from our legendary, high headroom XENYX mic preamps, which have been praised by audio engineers all over the world. These state-of-the-art mic pres represent a major step in the evolution of audio technology – and they can easily hold their own, even when compared to the most expensive stand-alone mic preamps. XENYX preamps offer a staggering 130 dB of dynamic range, with a bandwidth that extends from below 10 Hz to well above 200 kHz. Armed with these outstanding mic preamps, the XENYX 1002B provides such transparent, crystal- clear performance you just might think someone upgraded your mics while you weren’t looking.

The British consoles of the 1960s and ‘70s changed the sound of rock and roll – without them the British Invasion might not have happened. Those legendary mixing desks soon became the envy of engineers and producers all over the world. The channel EQ on our XENYX mixers is based on that very same circuitry, allowing you to imbue signals with incredible warmth and detailed musical character. Even when applied generously, these equalizers exhibit sweet forgiveness and superb audio quality.

Its compact size and flexible input scheme also make the XENYX 1002B the natural choice of sports announcers for calling play-by-play game action. Likewise, radio and TV reporters especially like the XENYX 1002B for its ease-of-use, remarkable fidelity and rugged reliability. And the 9 V battery option allows newscasters and correspondents to use the 1002B in remote locations where power is hard to come by. (Two 9 V alkaline batteries are required for normal operation, three for phantom power).

The Ins and Outs of Brilliance

The 10-input, 2-bus XENYX 1002B has 2 XENYX mic preamps with phantom power, making it possible to use 2 dynamic or 2 condenser microphones in Channels 1 - 2 (or one of each). Additionally, the first 3 of the stereo channels can also be used for mics, as long as line inputs are not connected on those channels. Feel free to play music between sets via the RCA CD/Tape Inputs (main mix or control room/phones assignable), and record your performance via the RCA Outputs. Plus, you can connect an external effects device to the FX Send, if you wish to add reverb, delay or chorus, etc.

No matter what your audio mixing needs, the XENYX 1002B provides the performance and features that can take your talent to the next level, at a price sure to amaze you. Professional sound quality, our legendary XENYX mic preamps, British-style EQs and rugged reliability make XENYX 1002B ideal for both your live gigs and recording. Try one on today – we have one available in your size!